Vital Signs Publishing was formed in 2003 by mysteries researcher Andy Thomas, with the help of friends and his (now) wife, psychological astrologer Helen Sewell, to put out two compilations of his earlier material – Swirled Harvest (now out of print but copies can be found here) and A Oneness of Mind, which were prototypes for the bigger volumes to come.

Named after Andy’s hit book Vital Signs: A Complete Guide to the Crop Circle Mystery (published by SB Publications in the UK and Frog Ltd in the US), Vital Signs Publishing was created to issue challenging ‘alternative’ material on unexplained mysteries and global cover-ups in a way that would not be compromised by restrictive practices or selective editing.

In 2005, Andy worked with prophecies researcher Geoff Stray to edit and produce what would become Beyond 2012, the much-acclaimed guide to end-times predictions. This very influential volume would go on to sell many thousands of copies around the world and be translated into several overseas editions. Reissued in 2009 with a new cover, this is the version currently available. 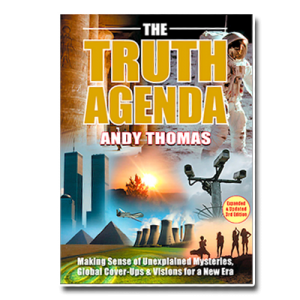 In 2009 Vital Signs Publishing produced its most ambitious project, The Truth Agenda, a high-quality full-colour tome which provided a much-needed accessible overview of paranormal phenomena, conspiracy theories, ancient prophecies, truth issues and consciousness research. Widely hailed as the best guide of its kind, The Truth Agenda has appeared in three updated and expanded editions, and a US version published by Adventures Unlimited. In 2011, the book was adopted as a sociology textbook at Canada’s Vancouver Island University.

In 2015, Vital Signs Publishing put out A Future World Vision, by entrepreneur and social commentator Richard Smith, which has been praised for its sensible and insightful approach to considering new ways forward for today’s global issues. This was edited by Andy, who also wrote the book’s foreword.

In 2017, Vital Signs produced a collectable limited edition book entitled Christmas: From Solstice to Santa. Based on Andy Thomas’s popular seasonal lectures, it tells the intriguing and surprisingly complex history of this ever-resilient festival. Produced in unusual green ink and with a gold-embossed cover, the book was happily licensed for an edited and redesigned 2019 worldwide hardback release by Ivy Press (a division of the Quarto group), which is the version now available on this site.

For enquiries about books and/or Andy Thomas, please email: info@vitalsignspublishing.co.uk

Vital Signs Publishing was founded by author and researcher Andy Thomas to provide a focused outlet for his own work and for other authors whose work he supports.

The books on this website gather together Andy’s currently available titles on unexplained mysteries, conspiracies and history, some published by Vital Signs Publishing and others produced by other companies but available as signed copies here.

More information about Andy, with news, reviews, videos and details of forthcoming lectures can be found at his website truthagenda.org